The School of Earth & Soul with John Philip Newell

The School of Earth & Soul is resuming its in-person gatherings in 2022. Its purpose is to awaken awareness of the sacred in all things through the recovery of Celtic wisdom for today and to help translate this awareness into compassionate action and justice. The School follows a three-year cycle of teaching and spiritual practice as follows and participants may join at any stage in the three-year cycle and attend any of the Earth & Soul venues. Mercy by the Sea is offering the second stage, Celtic Wisdom 2: Sacred Earth.

Celtic Wisdom 1: Sacred Soul (reawakening to the sacredness of every human being through the teachings of Pelagius, St Brigid, and Pierre Teilhard de Chardin)

Celtic Wisdom 2: Sacred Earth (reawakening to the sacredness of the earth and every creature through the teachings of Eriugena, the Carmina Gadelica, and John Muir)

Celtic Wisdom 3: Sacred Vision (reawakening to the sacredness of the human imagination and compassionate action through the teachings of Alexander John Scott, George MacLeod, and Kenneth White)

The essential text for the three-year program is John Philip Newell’s Sacred Earth Sacred Soul. And the shared prayer book of the school is Sounds of the Eternal: A Celtic Psalter. Learn more about the structure of the school here.

Program flow: This annual retreat at Mercy by the Sea offers three days of teaching and spiritual practices. Each day begins with meditative prayer and chant. In the morning and early evening, John Philip teaches from the wisdom of Celtic prophets over the centuries, applying the ancient wisdom to the most critical challenges of today. In the early afternoon, there is silence and free time for resting and walking. Late afternoon, we gather for a spiritual practice session before the evening meal, bringing our inner attention to the presence of the sacred within us and within all things. Our meals are shared in common, and on the evening of the second day, we have a social to celebrate our time together at the School and for John Philip to sign books. On the final morning before lunch, we share together in a closing ritual of thanksgiving.

Register For This Program 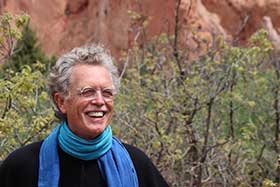 John Philip Newell (born 1953) is a Celtic teacher and author of spirituality who calls the modern world to reawaken to the sacredness of the earth and every human being. Canadian by birth, and also a citizen of Scotland, he resides with his family in Edinburgh and works on both sides of the Atlantic. In 2016 he began the School of Earth & Soul (originally called the School of Celtic Consciousness) and teaches regularly in the United States and Canada as well as leading international pilgrimage weeks on Iona in the Western Isles of Scotland. His Ph.D. is from the University of Edinburgh and he has authored over 15 books, including A New Ancient Harmony, Sounds of the Eternal, The Rebirthing of God, and his latest major publication Sacred Earth Sacred Soul. Newell speaks of himself as “a wandering teacher” following the ancient path of many lone teachers before him in the Celtic world. “Wandering Scots,” or scotus vagans as they were called, were seekers of the wellbeing of the world. He has been described as having “the heart of a Celtic bard and the mind of a Celtic scholar,” combining in his teachings the poetic and the intellectual, the head as well as the heart, and spiritual awareness as well as political and ecological concern. His writings have been translated into seven languages. In 2020, he relinquished his ordination as a minister of the Church of Scotland as it no longer reflected the heart of his belief in the sacredness of the earth and every human being. He continues, however, to see himself as “a grateful son of the Christian household” seeking to be in relationship with the wisdom of humanity’s other great spiritual traditions.